The holidays bring many traditions that have stood the test of time and crossed many cultures.  One tradition I look forward to in helping to celebrate the season is the availability of so-called Christmas beers.  This group of seasonal offerings are special brews produced worldwide in celebration of not only Christmas, but also the mirth of the holidays in general.  In a number of traditions going back well over a millennia, European nations began one by one to produce special beers for the end of the year.  Typically, these beers are spiced with flavors such as nutmeg, cloves, and cinnamon, and often present as strong dark ales.  They are meant to warm the soul on a cold winter day, and evoke frivolity of spirit in the celebration of the season.

A classic example that I have previously discussed is Delirium Noel, from the Brouwerij Huyghe in the city of Melle, East Flanders, Belgium.  It is part of a line of similarly named beers which include Delirium Tremens and Delirium Nocturnum.  It is a wonderful dark Belgian strong ale that pours a reddish-brown, is well carbonated, and tastes of the wonderful Belgian mix of sweet malt with fruit and spices.  At a sturdy 10% alcohol, this strong ale will keep you warm on a frigid night.  It is best served in a tulip glass, although a chalice will do. 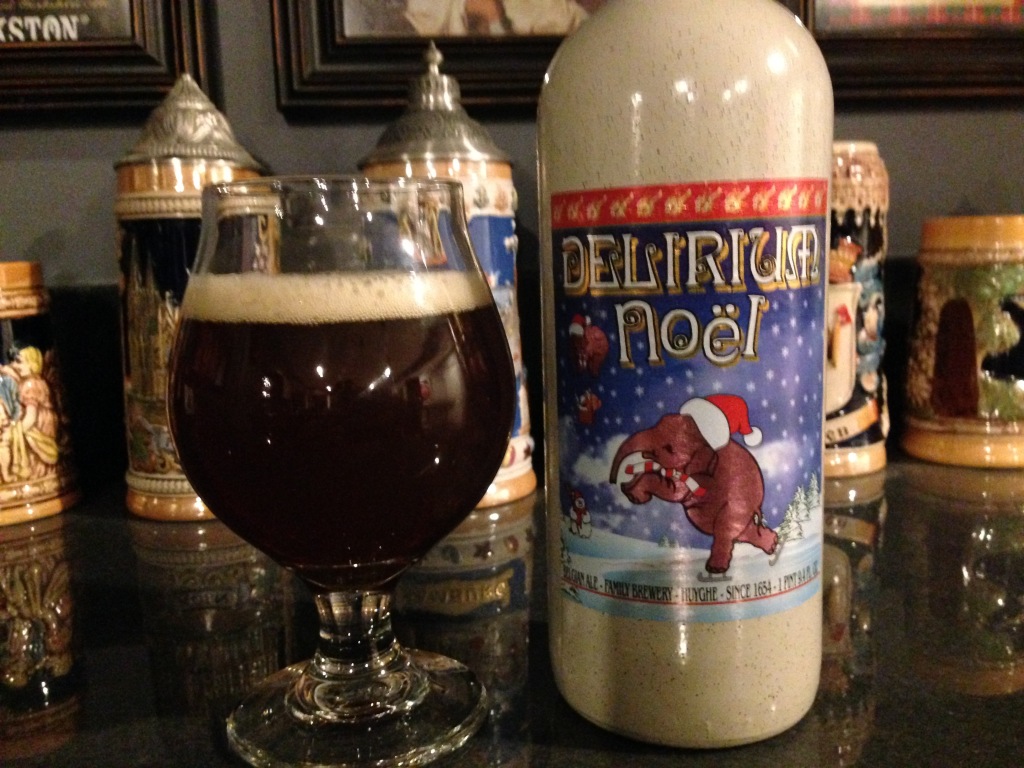 Many more Belgian breweries produce a similar dark Christmas ale, as do the French in the form of Bière de Noël, a very similar style of beer.

The Danes and Norwegians produce Christmas beers called Juleøl, which can vary in strength and color, and typically hover around 6% alcohol.  Both ales and lagers are produced for the season, but unfortunately I am not aware of reliable local availability here in central Indiana for any of these beers.

Germans produce Weihnachtsbier, which typically tend to be golden or copper colored lagers  more in the tradition of an Oktoberfest Marzen beer than a dark winter beer found elsewhere.  Another offering of beers not represented in the offerings of this area’s retail stores.

Samuel Smith’s Winter Welcome Ale is a stellar English ale from the storied Samuel Smith’s Brewery in Tadcaster.  While not technically a ‘Christmas beer’, this winter warmer-style beer has a nice amber color, with an unspiced sweet malt and fruit flavor.  At 6% alcohol, it is somewhat lighter than most beers of the season, but has a gentle smooth taste.  It is readily available in local shops.

Americans produce a huge range of Christmas beers from coast to coast in hundreds of regional microbreweries, that vary in style, color, and strength.  Many evoke the classic dark spiced brews of their European counterparts, although not all follow the trend.  One of my favorites comes from the relatively large Sam Adams Brewery.  Sam Adams Old Fezziwig Ale is a mildly spiced dark brown winter warmer ale that is a great introduction to this style of beer as it is not too complicated and very flavor-approachable, with a relatively light 5.9% alcohol content.  Unfortunately, it is only currently sold as part of the Winter Classics 12 pack, containing only 2 bottles of this delicious unique ale.

Finally, this discussion would not be complete without mentioning the most famous of Christmas beers, the elusive Samichlaus.  This special and very strong beer (at 14% alcohol it was once the strongest beer in the world) is brewed only on December 6th of each year, the day of the feast of Saint Nicholas, the early model for modern day Santa Claus.  It is then aged for 10 months.  This was originally a Swiss beer whose availability ceased, but it is now produced again in Austria.  It is a densely strong beer suitable with chocolate dessert, and is very sweet and intense.  A sipping beer for sure, count yourself seasonally fortunate if you can find one!

However you celebrate the holidays, be sure to enjoy a hearty and warming Christmas beer this winter.